Unifying the University of Washington's Husky Stadium by integrating branding and storytelling that celebrates the game-day experience.

Celebrating the Huskies’ spirit in their newly renovated stadium.

The University of Washington has long been recognized as an academic and athletic stronghold, and Husky Stadium as one of the most spectacular venues in college football. We were asked to apply branding and storytelling throughout the newly renovated facility to celebrate the Huskies’ victorious spirit.

Weaving in imagery and messages throughout that inspire visitors and student-athletes.

As part of a bold football stadium renovation, we helped generate branding and messaging that celebrate and elevate one’s game-day experience. To do so, we digitized archival photos and created original custom assets and other large-scale imagery that adorn the public spaces at Husky Stadium. Premium areas, such as the Don James Center, Club Husky and Touchdown Terrace, now welcome the most invested fans with exciting new features and accommodations. Plus, a renovated strength and conditioning facility inspires student-athletes with imagery and messaging to bring out their best.

A unified experience that connects the stadium to a wide range of audiences.

Husky Stadium posed a challenge because more than half of the renovated stadium was brand new (the north stands and west concourse), while the other half was a true renovation of the existing space (the south stands). In many areas, most importantly the concourse, a system of graphics was needed to help unify the inherently varying architecture. This project also covered the entire gamut of collegiate athletics audiences: including on-field/broadcast visible graphics, public concourse, private clubs and suites, private student-athlete and coaching spaces, as well as recruiting spaces.

"We can compete with anyone now as far as facilities. I'm very comfortable saying that with this new happening in football and this new facility." 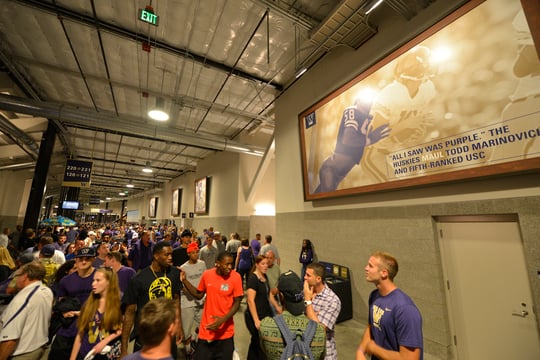 The proud history of Husky football is reflected throughout a series of super graphic portraits of great moments that ring the concourse. 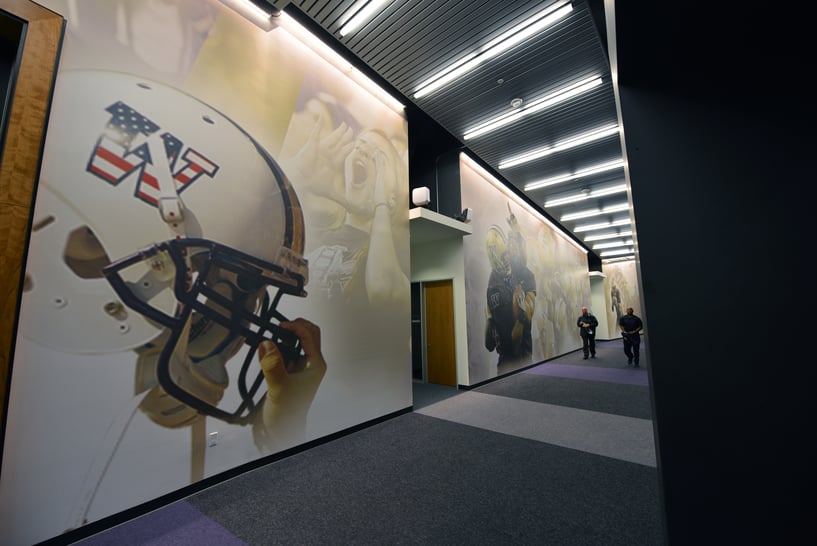 Heroic graphics in the hallway outside the locker room and team meeting areas instill a confident tone. 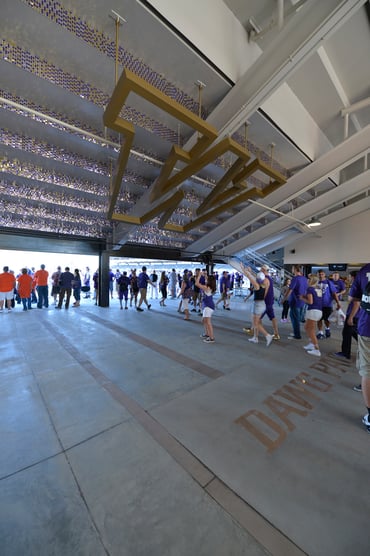 Purple and gold shimmering disks framing the W at the student entrance marks the gateway for the “Path of the Pack”, and is a popular photo op attraction.