We partnered with Pernod Ricard 24 months ahead of their move, to define a workplace strategy for their new Sydney headquarters at Barangaroo. The result is a convivial workplace that embodies their culture and empowers their people.

For Pernod’s HR Director, Christian Campanella, the new workplace signifies more than a physical move, it has become a vessel in which their workplace culture can thrive, “You cannot underestimate the impact the physical environment has on a workplace. We are trying to drive a culture of innovation, agility, collaboration and this space is an enabler to doing that. Ultimately it is going to drive the culture of the organisation and the way we work.”

Having occupied a very traditional workplace split over three levels, Campanella reflects on the previous work style that drove the business. “It was one where people stuck to their space, there were silos and it was easy to be hidden. It was an environment where collaboratively we could do better. That was a big part for us in terms of changing our way of working. The new workplace allows us to be more innovative, agile, collaborative and to communicate more freely within our organisation.”

Justin Conceicao, Senior Workplace Strategist at Unispace says, “People are spending more time at work, so our job is to make sure workspaces are not a barrier to how people go about their day-to-day lives. The workplace is meant to make your life easier, not harder. At Unispace we want to remove barriers for people so that they can get as much enjoyment and productivity out of the space as possible.”

Working with Unispace broadened the scope for Pernod Ricard who were initially considering staying where they were. It provided them with a new direction with which to approach the project. Campanella says, “Once we embarked upon our strategy phase, it flipped the equation. It became about trying to understand how we create a great space for our employees, to engage and attract people to our business and more importantly to retain them.”

The strategy process commenced 24 months before Pernod Ricard’s lease expiry and initially looked at a business case around stay or go, followed by a transit impact report, qualitative and quantitative research including a survey across the entire staff group, and leadership workshops to identify business objectives. The resulting strategic report gathered by Unispace recommended an ABW work style with assigned neighbourhoods and supporting space for focus and collaboration. This vision informed the design and delivery of the new workplace.

A memorable highlight of the strategic process for Campanella was the space utilisation study which provided key metrics on space efficiency. Findings revealed the average space utilisation was less than 50% when looking at a 4,000 sqm floor plate. “These findings reinforced the move to the ABW concept in the new workplace, an improvement for our employee culture from an agility and collaborative point of view.”

The team now works within a 2,500 sqm floor plate which is driving better outcomes for the business, inspiring conviviality and encouraging cross-collaboration. “We don’t feel crammed in as there is still a lot of space and a lot of freedom of movement. We are using the space better because we are in an environment that our employees love and really enjoy working in.”

The ABW style generates a sense of empowerment offering Pernod Ricard's people freedom of choice, shaping a mindset of flexibility and agility. Campanella says, “People are sitting where they want to sit, with who they need to do their job effectively. It’s natural you get this increased level of buzz within the office”.

For Pernod Ricard the role of the physical environment is to support workplace culture, drive high performance and facilitate natural conversation. A collective decision was made during the strategy phase by the executive team, to move out of their offices and sit with their teams. “One of the supporting enablers to making this decision was the utilisation study as we were hardly spending time in our offices,” says Campanella, “It has made a huge difference being on the floor with our teams. The accessibility for people to talk to you freely, I don’t think you can measure that.”

The overall journey that Christian and the team have been on is one of amazing change, Justin comments “They’ve gone from 50 offices down to 0, they’ve gone from allocated seating to completely flexible, they’ve gone from Macquarie Park into the new Barangaroo precinct. This change has been enormous for the business, physically and culturally. It was only able to happen because they really took ownership of that change. Unispace is really proud to be a part of it.” 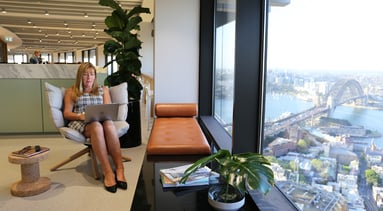 Get out of that office. 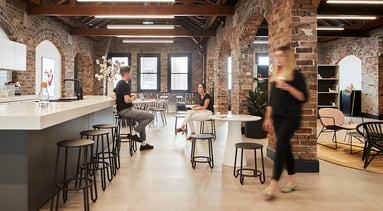 We talked to over 270 executives around the world...